The Reykjavik Study was established by The Icelandic Heart Association in 1967 as a long-term population-based study. It is a prospective cardiovascular survey(study) in a large cohort.

The Reykjavik Study originally comprised a random sample of 30,795 men and women born in 1907–1935 and living in Reykjavik in December 1966. The  cohort was divided into six groups (B, C, A, D, E, and F) by birth year and birth date within month,

TABLE 1. Cohort recruitment and examination schedule for participants in the Reykjavik Study (1967–1996) 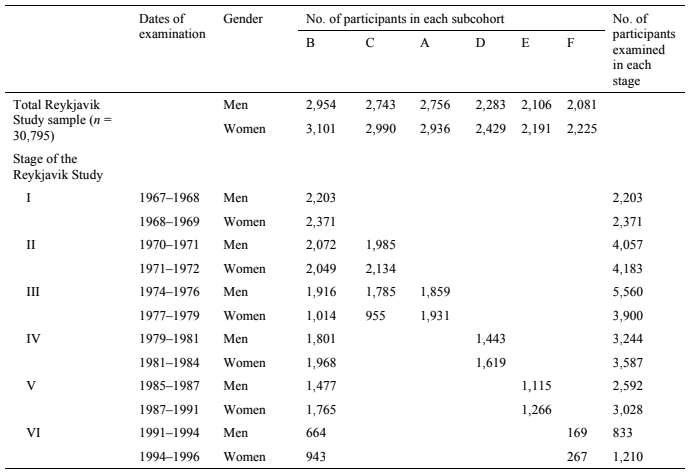 Men and women were examined in separate years for more efficient clinic operation. Since a standard examination was performed in each stage, longitudinal and cross-sectional data could be used to study secular and individual changes over the 30-year follow-up period.

The stage VI examination (1991–1996) focused on persons aged 70 years or older from the F and B groups. It included the core examination components, plus measures of cognitive and physical function, social support, and other topics particularly relevant to aging. Surveillance for vital events and cardiovascular disease events has been continual in the cohort since 1967.

References to key research papers from the Reykjavik Study are summarized below.